Located between our navel and solar plexus, the Manipura Chakra is our self esteem, confidence and self assurance. After overcoming the negatives of Svadhisthana  (2nd chakra), the third chakra gives us a new lease of life in facing the world.  ‘Mani’ in Sanskrit means ‘jewel’ and ‘pura’ means ‘city’ – thus the jewels of the city refer to the common sense that we find in everyone or that clarity that we have if we listen to our inner core. While the second chakra dealt with our desires, the third chakra is more concerned with our identity, the way in which we present ourselves to the world.

The three lower chakras are considered earthly chakras as they deal in various ways with our sense of self, that physical part of us that wants to survive. Manipura is the last of these and can be considered a type of gate to higher energy in the sense that if we are self assured, confident and feel we are worthy of enlightenment, then we can best set our energy in that direction. The next chakra, the Heart, acts as a balancing point between these earthly chakras and the top three ‘spiritual’ ones.

Manipura is associated with the element of fire and the process of transformation. In Traditional Chinese Medicine, the Heart and Small Intestine are both represented by the element of Fire. However, the elements in these systems are not the same despite the two traditions having developed over a similar timeframe. The Liver and Gallbladder (wood element) would seem a better fit, given that they are responsible for our ‘ministerial fire’. They are responsible for the smooth flow of our emotions and qi and in this sense, they are more closely related to the energies of Manipura. In the case of the Gallbladder in TCM,think of the old saying ‘You have some gall!’ as in, you have some nerve, or you are brave. This is the self assurance of Manipura.

This chakra governs our digestive system and inward and outward energy (Prana Vayu and Apana Vayu) meet there. When the fire is weak here, not only can we have undigested food causing us problems, but our thoughts, actions and emotions also remain ‘undigested’. We do not process them correctly and their energy can remain clinging onto us.  When the fire is strong, we find ourselves able to transform negatives into positives and laziness into action. The fire or sun within us shines brightly and sends its light all over our body and throughout the body. We can move forward, free from the past dragging us down. Conversely, if the fire is burning out of control, we are over angry, extremely energetic, judgemental and aggressive.  We can think of Manipura as the ‘zest of life’ and whether we are up or down, it is a reflection of the state of this chakra within us.

The symbol of Manipura is the downward pointing triangle within a yellow circle surrounded by ten dark petals. Inscribed on the petals are the Sanskrit syllables da, dha, na, ta, tha, da, dha, na, pa and pha. Its sound is RAM and is depicted as a fiery yellow. Thus we can work on this chakra with yellow foods such as peppers (yellow!), banana and sunflower seeds. The wavelength of the solar plexus chakra is 528Hz 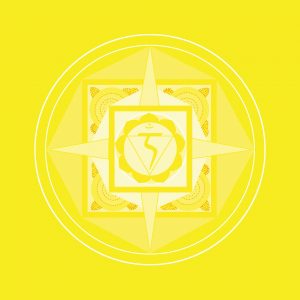 The animal of Manipura is the ram. Cinnamon, ginger and saffron spices are associated with the third chakra as are the gemstones Tiger’s eye, citrine and yellow tourmaline. The planet Mars (the god of Fire) is attributed to this chakra.

Working on the Solar Navel Chakra is important if we want to build a strong trust in our gut instinct. When energy flows freely in this chakra, we are able to control the base energy of Muladhara (root chakra) and the emotional energy of Swadhisthana (Sacral chakra). Being in balance this way radiates out to those around you who can sense your inner fire and peace.

Symptoms that Manipura is out of balance include difficulty reaching goals or even setting them, anxiety, stomach problems, heart burn in the solar plexus area, aggressiveness and trouble expressing our feelings. When we rush to judgement or allow our feelings to erupt and later find we are giving out to ourselves for our behaviour, this chakra is out of balance.