If there was ever a survey that highlights the trend away from established religion, a recent one by St Mary’s University in Twickenham, London has got to rank right up there. Trawling through 21 different European countries, the survey assessed 16-29 year olds and found that 70% identified as having no religion while 59% said they never attend religious services except for events like weddings and funerals. The figure was even higher in Czech Republic with 91% identifying as ‘no religious affiliation’, 80% in Estonia and 75% in Sweeden.

Only 2% of Catholics in Belgium attend mass weekly with the figure much higher for Poland (47%), Portugal (27%) and Ireland (24%). Only 26% of French young adults, and 21% British ones, identify as Christians. Only 7% of young adults in the UK identify as Anglicans, compared to 6% as Muslims. In France, 2% identify as Protestants, and 10% as Muslims.

The survey was based on data from the European Social Survey which takes place every two years. 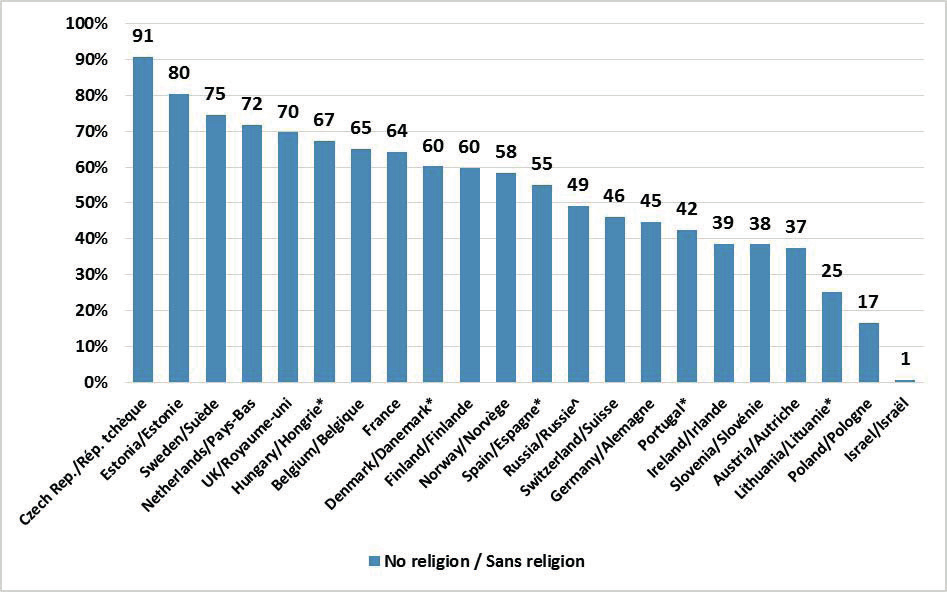 Percentage of young people identifying as ‘no religion’

Stephen Bullivant, Professor of Theology and the Sociology of Religion at the university and lead author of the report told the BBC that, “For a large proportion of people who have been baptised, they have little family religious engagement after that, even for those attending faith schools. Their parents and grandparents might have received a sufficient enough ‘dose’ of religion during their upbringing to still affiliate as such later in life, very few of today’s young adults have had any serious connection with religion at all.”

One aspect of the trend is that the Professor believed that those that remain religious will be far more devoted to their faith in the future.

It would be nice if a survey on spiritual practice of young people could be undertaken. Although we known from several surveys that people are leaving organised religion (and a quick look around the local church will confirm this), that is not to say that people are turning away from spiritual practice. Even a cursory glance at Instagram, Facebook or Snapchat and it’s hard avoid some quote or spiritual picture being shared. Maybe people are just finding new ways to connect with god, ways that are far more personal and self motivated than the previous ‘must go to church or I will spend forever in hell’ motivation.

Dependent on the State
World UFO Day
The Gospel of Mary
Do trees communicate with humans?