A young man holds his wand as if fighting off six other wands protruding from the bottom of the card. He is on top of a small hill or mound and facing the other wands directly. He wears two different shoes.

The Seven of Wands is all about battling onwards, perseverance, determination and an ability to fight alone. The young man or page finds himself alone but unbowed. He is more than capable of fighting his corner. He has taken the high ground and is unwilling to be subdued even when faced with so numerous an opposition.

In readings, the Seven of Wands is a call to action. We may be facing a situation where the world is against us, where circumstances seem overwhelming, where it might just be easier to give up and go home. This card urges us to grab our staff and fight. We must not give in to pressure, we must not cave in the face of numerous opponents. If we fight, if we make a stand, the day will be ours.

That is not to say it will be easy. In business, we may be warding off competition and fighting for contracts. We may be fighting for our health, determined that we will beat our illness. Our relationships may be in trouble but we fight to save them.

Whatever our current battle is, the Seven of Wands exhorts us to keep going and not give up.

The two different shoes worn by the man indicate that we are slightly off balance. Our fight may seem chaotic, we may be getting little sleep or rest, we may be finished one quarrel only for another to spring up someplace else. These are all depicted in the Seven of Wands.

It is one of my favourite cards of the Tarot, a spirit that cannot be subdued just because the odds look stacked against him.

Reversed
The Seven of Wands reversed suggets that we may be avoiding a confrontation or we have given up trying to win. With the odds against us and opponents that seem to numerous to battle, we have not even tried. The battle is still to be fought but we cannot bring ourselves to fight it.

It may also indicate that we have bitten off more than we can chew. We are fighting on several fronts and our position is becoming ever more precarious. It is time that we focused on winning one battle besides trying to win all battles at the same time. 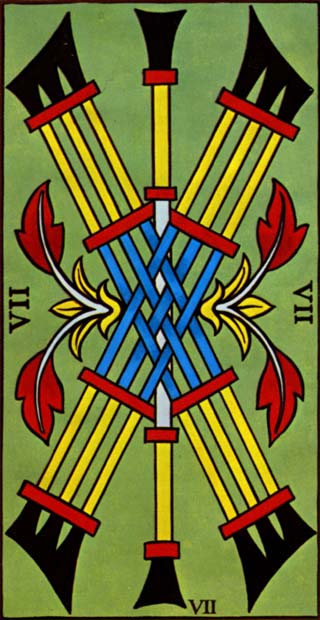